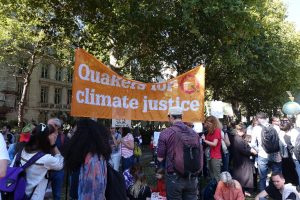 On the 20th – 22nd September London Linkers Gathered in Epping. We had one of our most ambitious and “logistically heavy timetable” – Michael Wood events planned, and we’re happy to say we succeeded, with the assistance of 7 brilliant volunteers, in showing 14 “Linkers” not 1, not 2 but 3 centuries worth of delight in Essex in a weekend that utilised 5 trains, 3 buses, and 1 (not so) secret nuclear bunker!

Epping Meeting (established in the 1700’s) offered to host London Link in their beautiful Meeting House situated in the Market Town of Epping. The fun started on the Friday night with a tasty pasta dish (with roasted broccoli proving an unexpected hit with the young folk), games and a peaceful Epilogue. 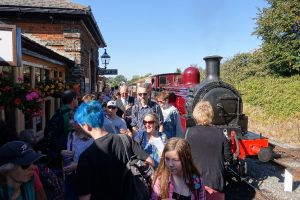 An solid (veggie) cooked breakfast gave everyone the energy they needed to make the early start on Saturday – with a huge stack of sandwiches being constructed around the tidying up. We made it to the bus stop on time and all (just about) piled on to the vintage (Routemaster) 339 bus with a group of

Morris Dancers(!) for the pretty journey to our destination – the historic Epping and Ongar Railway where we spent a happy 20 minutes at the North Weald Station admiring the trains, architecture, Morris Dancing and the gift and tuck shops (we won’t let on to parents and carers quite how many snacks were purchased but it is was all for a good cause).  An 1800’s steam engine (Met 1) (perhaps appreciated more by the older members of the group) conveyed us to Ongar Station where a mad dash got us back on the 339 for a trip to the 1950’s and a product of the Cold War….. 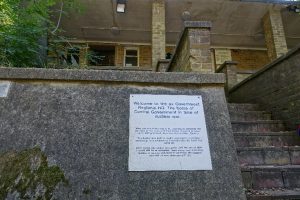 Kelvedon (not so) Secret nuclear bunker 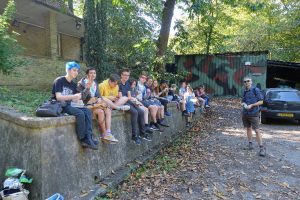 Picnic at a nuclear bunker

But before starting our tour of Kelvedon’s (once) Secret Nuclear Bunker it was agreed that feeding stomachs took precedence over feeding minds and we had our picnic sitting next to a stack of military equipment (and a replica missile) – not a usual location for Quakers.. Once in, we spent several hours exploring the 3 floors of the bunker which started life as an RAF ROTOR Station, then had a brief period as a civil defence centre, then becoming a Regional Government HQ before being decommissioned in 1992. It was designed for up to 600 military and civilian personnel, possibly even the Prime Minister (there were several dummies meant to be representing Margaret Thatcher in different locations which were properly scary), in order to organise the survival of the population should there be a nuclear war. The communications, medical, working and sleeping spaces were fascinating but also quite spooky – though nowhere near as scary as the government information films and adverts telling people what to do in the event of a nuclear war. The official commentary was very dark and confirmed my reasoning that survival might not in our best interests….. 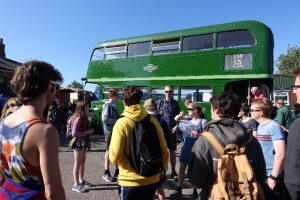 A sit in the sun to absorb both the horror, and a piece of flapjack, preceded another bus ride on the bouncy bus back to Epping for a cup of tea, sit in the garden, and for groups of Linkers a wander around the shops. After a full day, Saturday evening was chilled with board games, music and a gorgeous potato and spinach curry.

On Sunday morning we joined Meeting for Worship and many of us then spent a happy Children’s Meeting making cards to thank Michael for his 10 years as Clerk of London Link!

Thank you to Epping Meeting for hosting us! 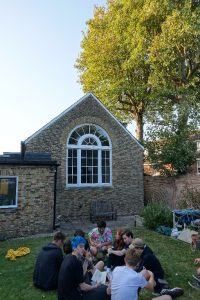 Next committee meeting we will be planning our programme for late 2019/2020, watch this space! Helping set up the Quaker Homeless Action Christmas Shelter and Winterval at Westminster in the New Year are likely to be the next two events. Sign up to our mailing list to get notification.

We look forward to seeing you all again soon,
Rebecca

Alan, Amy, Eli, Margarita, Michael, Philip (and we can reassure everyone that Michael hopes to volunteer in future events – phew).

p.s. Note for parents/guardians – Unfortunately this time there were some issues with respect for Meeting House property in the library/female sleeping area – despite being asked to leave the contents of a cupboard belonging to a hirer alone, after the event we found this not to have been respected, leading to the loss of chocolate and sweets belonging to an Alzheimer’s group who were understandably upset. Please remind young people that they agree to adhere to the boundaries at our events and that we do rely on the goodwill of Quaker groups to host us, which part of this is respecting the building and contents! Thanks