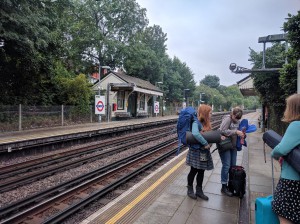 On a drizzly Saturday morning, eight Young Quakers and five adult volunteers gathered at Finchley Meeting House for a weekend residential. Some met at Euston station and travelled together, a few met at the Meeting House. While waiting for the Euston group, introductions began. Along with sharing names, we consider what kind of a sea creature we’d like to be and what our name would be on Mars. After some offerings, the conversation turned to facts about dolphins and stories about the many and varied types of sharks and how they interact with people.

Duly the damp Euston group arrived, unburdened themselves of their luggage, dried off, had a quick tour of the Meeting House, and more introductions and name games took place.
Lunch: make your own sandwich got the chatting going and the weekend was off for a great start. It was a relief to see the sun, and so we tromped off to the local park with space to run around, plays some games and catch up with friends we hadn’t seen for a while and get to know those we hadn’t met before. 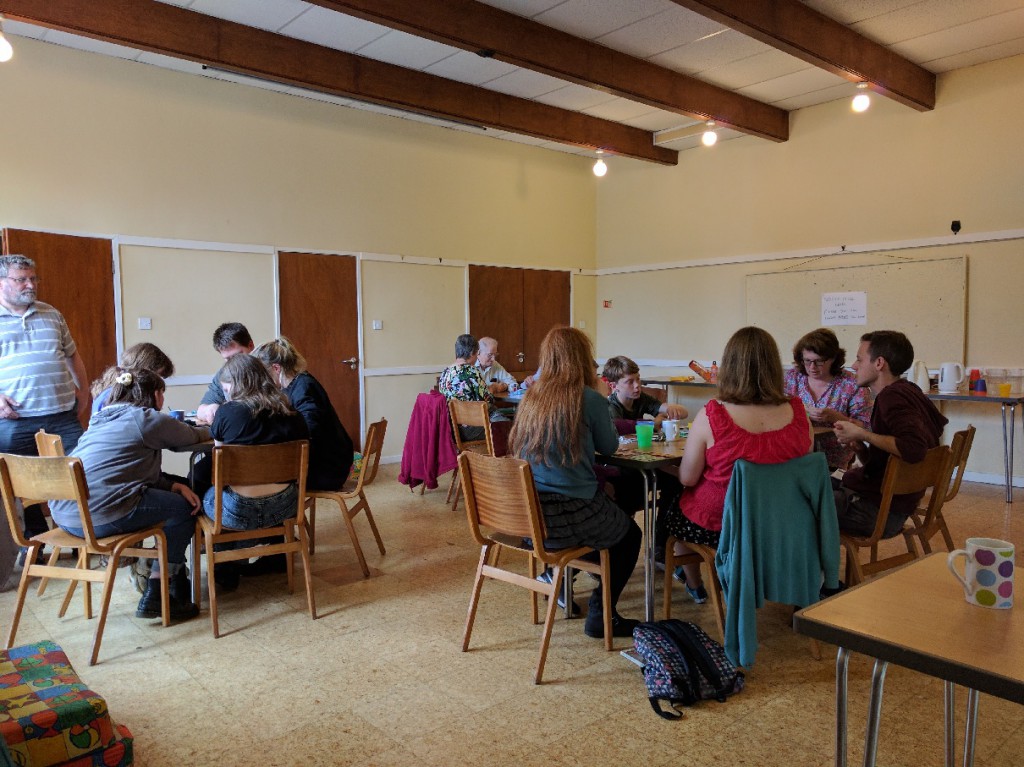 We returned to the Meeting House mid-afternoon for a few hours of playing a variety of board games. We were joined by young and older Friends from Finchley Meeting and elsewhere, and David Parlett, a Quaker Friend who makes games (best known for Hare and Tortoise). He brought out some of his games which were fun and a bit different. Meanwhile, a friendly head-butting game of Monopoly (created by Quakers, did you know?) was taking place at the neighbouring table. Banana grams (a bit like scrabble but you work independently) was popular with a few games happening in the time that the one Monopoly game ran.

In spite of snacking out on lots of crisps and biscuits during the game playing, we were still hungry for supper. A few of us helped in the kitchen to create our gourmet salad and the well-remembered pasta dish. After clearing up, we had a wild game of newspaper hockey. We created our own “sticks” from rolled up newspaper, moved all the Meeting benches to the edge of the room, teamed up, and then wham! It was a fierce game of wildly hitting the ping-pong ball and manoeuvring it past opposing team mates for the all-important scores. When all “sticks” had disintegrated, it was time for a few games of sardines. Shrieks from the shower ended the game. Those hidden emerged dripping wet! Was it a coincidence that only one player remained dry?

Fortunately the sun was out, so we gathered in the garden for a bit of a rest. Sadly the plastic slide and sand table – which belonged to the resident friends’ 3-year old – was off limits.
As dusk gathered, we built a fire in the garden and enjoyed its warmth and light. We enjoyed some mini (and very mini ,mini) marshmallows and then baked bananas which were surprisingly delicious. After a long and exciting day, we ended the day with a calming epilogue around the fire and under the night sky. Finally, off to bed for a well-deserved sleep: divided with a larger group in the main big room and others in the smaller carpeted room. 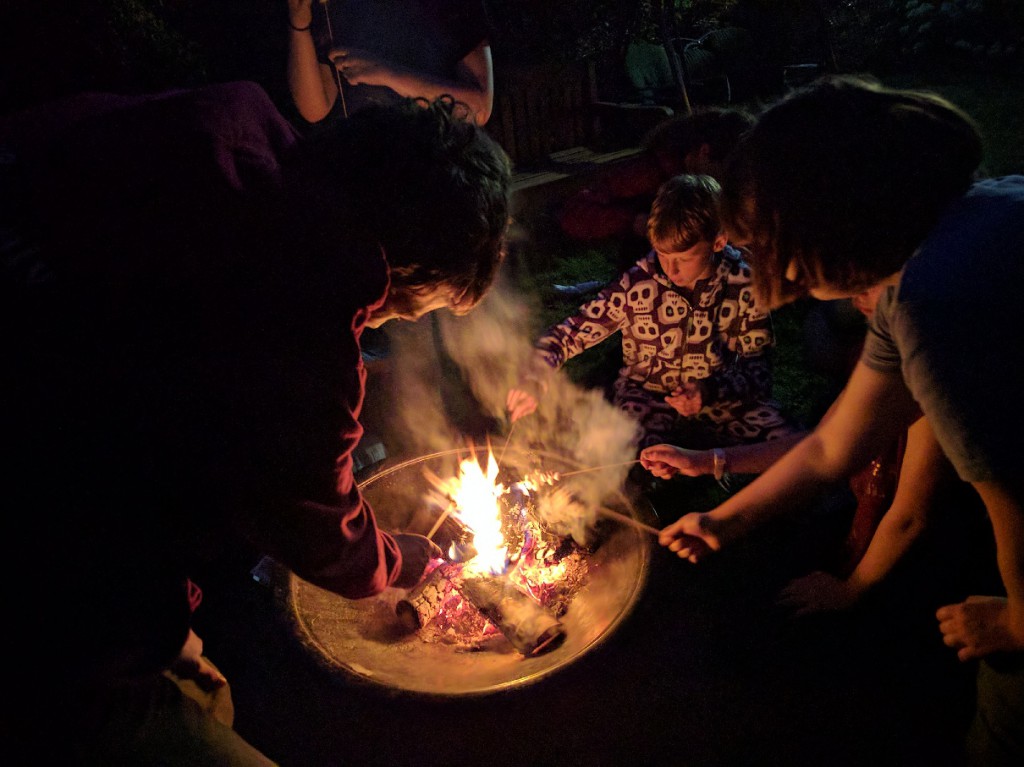 We were woken up in the morning with some optional tea and coffee and a fabulous full (veggie!) fry up, along with choices of cereal and fruit. Sleeping bags and mats were tucked away in the small room, and we readied the Meeting House for Meeting for Worship. 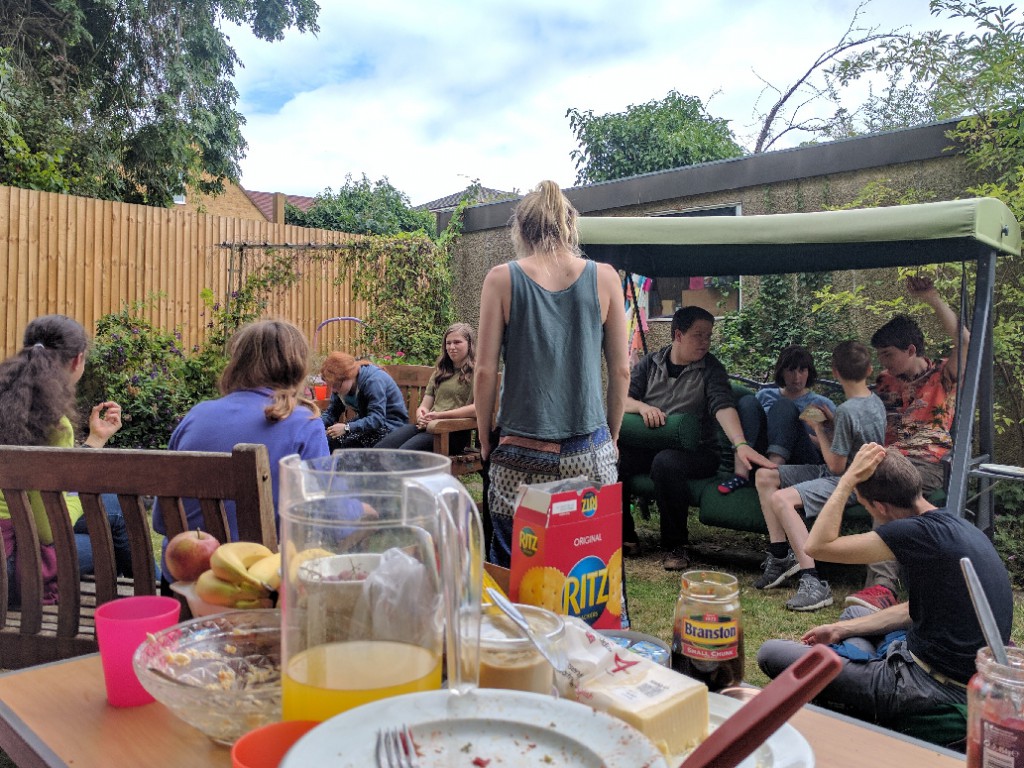 We gathered as a group in the beautiful garden for our own Meeting for Worship, planned and lead by one of us, looking at the theme of Yearly Meeting through crafts and guided meditation. We then joined the adults for the last part of the hour.

Once the Finchley Friends left, we had a quick lunch of left overs and sandwiches out in the garden with the sun shining brightly. Helen MacKeith, an artist, taught us frottage: fancy word for surrealist rubbings. 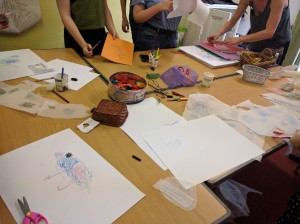 The technique was developed by Max Ernst and Helen showed us photos of the fantastic birds and scenery he created from his rubbings. We then all had a go at finding textured surfaces, creating our own rubbings and cutting and gluing to create our own wild and imaginative birds and images. If you visit Finchley Meeting House, soon, you’ll see some of our art hanging on a wall. Few of us finished our creations because all too soon, it was time to leave. 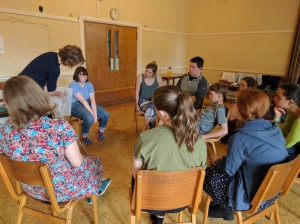 We were a small group and for some of us that was a treat. It gave us more time to get to know each other better. We are very grateful and want to offer a huge thank you to Finchley Meeting, especially the friendly and welcoming resident Friends, Jessie and Peter. Thank you, too, to Michael and Augene for organising, and for the support and help of Rob, Katy, and Olivia who stepped in at the last moment to ensure the weekend could happen. 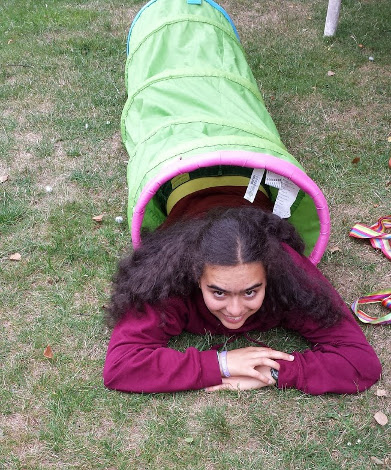